The following brought to you by Kitch!

Kitch! Not just for Breakfast anymore! 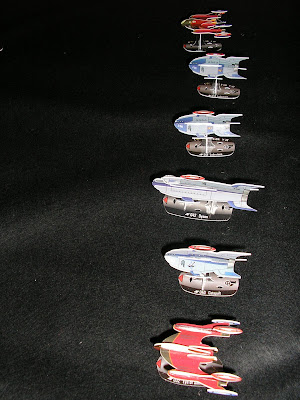 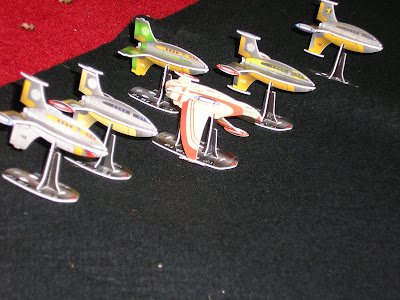 The Axis fleet were overmatched but had a simple objective, break through the Alliance fleet and exit as many of the Ganymede rocket ships as possible. The Ganymede ships are armed freighters, the Dyson’s cargo bays having been converted to fighter bays, the rocket ships are carrying bulk rocket fuel.

The two fleets encountered each other in the midst of three Asteroid Fields. The two fleets deployed facing each other across a gap between two of the fields. The Rebel fleet took the initiative and manoeuvred towards the enemy, launching a torpedo spread at the Dyson and two spreads at the Mauler. They also fired two long range ray attacks that proved ineffective. In response the Axis Fleet headed directly towards the Alliance ships, with the Dyson launching its two fighter squadrons, one to defend against the incoming torpedoes and the other to attack the Samael.

The Icarus Jane, flying dangerously close to one of the Asteroid fields, overloaded its weapon pods and fired at the Lodestone, causing serious damage to its superstructure, disabling a weapon pod. It also launched a torpedo spread at the Mauler. The Freebooter also overloading its weapon pods fired at the Lodestone, which heavily loaded with fuel, blossomed into a huge explosion. The Outrider, taking a leaf from the other Rebels, overloaded its weapon pods and destroyed one of the Maulers wings, carrying away one of its weapon pods. The Great White moved around another of the Asteroid fields away from the rest of the fleet effectively meaning it was alone against the Catapult and Eye of Sathrass. A weapon pod attack on the Catapult went wide. The Homeland powered towards the enemy, launching a torpedo spread against the Dyson. The Samael with supreme confidence fired its weapon pods at the Dyson at long range, only to see them pass harmlessly by. The Axis fleet doggedly held their fire and closed the gap. 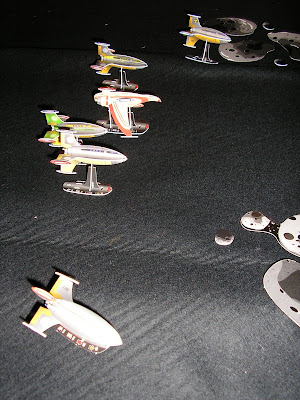 The Icarus Jane, dodging Asteroids at the periphery of an Asteroid field, could only manage a Torpedo spread at the Compass.

A spread of Torpedoes reached the Dyson but was destroyed by the point defence system.
The Axis fleet once again, held their fire and headed directly for the Alliance ships. 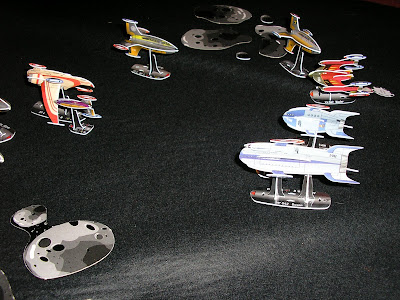 The Icarus Jane still tempting fate by skimming the outskirts of an Asteroid Field accelerated further, firing her overloaded weapon pods on the Eye of Sathrass. On board the Sathrass’s bridge panel’s exploded and crewmen were thrown about like dolls. The Outrider’s weapon pods tore into the Lodestone destroying several of the unfortunate ships systems and at the same time she launched a spread of torpedoes at the Dyson. The Great White overloaded her weapon pods and fired a barrage of shots at the Catapult, melting one of her weapon pods to slag. Homeland launched a spread of torpedoes at the Dyson and the Samael closed with the Sathrass and overloading her weapon pods fired on her, destroying a weapon pod.

Two Torpedo spreads struck the Dyson, causing several hits on her hull and weapon pods, which resulted in serious damage. The unfortunate Compass was struck by another spread of torpedoes, her hull crumbled and she erupted into a ball of plasma. 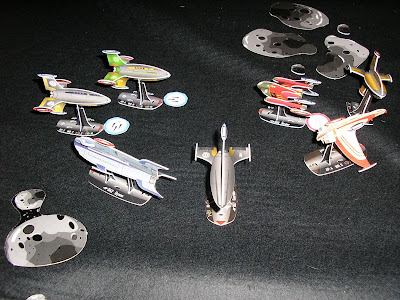 The Sathrass turned away from the main battle and towards the Great White, firing torpedoes towards the Rebel Cruiser. The Catapult strained her engines to draw ahead of the Sathrass and also launched torpedoes at the Great White. The Mauler’s crew managed to patch up some of her damage and the Dyson launched a squadron of Legion Fighters at the Samael.

Two torpedo spreads struck the Great White, destroying one of her weapon pods.

The Icarus Jane left the relative safety of the Asteroids and manoeuvred behind the Mauler. At the perfect moment she fired her overloaded weapon pods into the Mauler’s aft. The Mauler now with critical weapon damage limped on with the rest of her fleet. The Great White, now alone and fighting two axis ships, fired her remaining weapon pods, on overload, at the Sathrass, tearing serious holes into her hull and destroying one of her weapon pods. The Outrider swept around the damaged Dyson, firing into her rocket motors. This caused a chain reaction that tore the ship apart taking with it one of the Legion of Terra fighter squadrons. The Mauler, now the only Axis ship facing the main Alliance fleet was the target of torpedoes from the Freebooter and Homeland but it was the Samael which delivered the Coup de Grace into the aft of the crippled Mauler, ripping it apart. 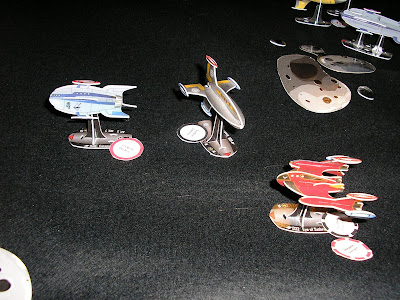 The Eye of Sathrass crew performing well, if far too late, managed to divert power to their rocket motors taking them out the battle area. The Catapult’s crew performed even better, launching torpedoes back towards the Great White whilst keeping pace with the Sathrass as they fled the battle.

Thanks Kitch! An outstanding report and thanks for the feedback as well.

Well, I passed my Cert exam and that huge chunk of time is now freed up and I hope to focus a bit on Void and Stars.  I really feel we are getting pretty close.

Kitch has sent me a battle report with pics to follow.  I'll post that Monday or Tuesday.

Update or Lack there of...

Sorry for the silence.  I just got back from being out of town for a five day and I have a big Cert coming up next week.  Most free time is going to be sucked up with study and work until then.

Sorry for the delay.  I hope to get 1.5 out soon for review.

Thanks for your patience.

News Flash:  The Red Dog Miners declare Independence!  Read all about it at The Stronghold Rebuilt!  That is all.

Good report as always from the Kaptain.  Follow up questions were solid and will help to continue to clarify the language.

I just hit send to the play testers on version 1.4 of the rules.  Still a work in progress, but I hope we are getting closer.  Special thanks to those testers that have been active in the feed back.  We might not take 100%, but it is a 100% appreciated.  Keep it rolling.

Here are the big changes...

- Characters are out. Space saver will move to second book if we get one.
- Measuring - From the bridge/point on ship.
- Escort Support - Updated -escorts 1D6+CV vs. Missiles CV - Easier math/quicker play
- Overload - Now provides +2 to Attackers CV. I know it is better to decrease defender, but we couldn't get over the fluff that you overload your own.
- Capital vs. Escort - We took Kaptain Kobolds advise and have added 'Construction Points' that are just CV and Systems to determine the cut line between the classes. Total Points is still the cost to buy into your fleet.
- Doctrine: Assault Craft - Changed to first shot is a free overload.
- Flag Ship - Allows Squadron Orders
- Encrypted Comm Link - Bonus to escorts for Squadron Order.
- Scenarios added
Look forward to the feedback, especially on the scenarios.

Steve and I sat down on Thursday and ran a game with most of the above changes or had outcomes that created those changes.

I'll try to get a full BatRep, but sufficient to say the Imperium force made the Insurgency question the validity of their actions.  Steve had a bunch of bad activation rolls that really limited his ships from being in the flight while the Assault doctrine went to town...  We had a real hard time measuring from the bridge.  We have been playing from day one with base measurements it was hard to break the habit.

Questions to the Testers (and anyone for that matter)

Here a quick set of questions I would love to get feedback on.

- Currently the Fleet Command Center provides a +1 to all Quality rolls while within a distance of 2L.  Should this be limited to Activation and Morale checks or retained for all Quality rolls?

- Overloaded Weapons - in the current write up, overload seems undervalued.  In test plays I would rather spend the extra action on an additional shot vice a -1CV to my target.  For example if we are both CV3, I would take two shots at 3 vs. 3 vice one shot at 3 vs. 2.  Am I off base?  Would you be tempted to use overload if it gave a +1 CV as well as a -1 CV to enemy?  In same example I would get either two shots at 3 vs. 3 or one shot at 4 vs. 2.  What do you think or do you have other ideas?

- Direct Fire Range - We have had confusion between the movement sticks distances and the the direct fire  ranges as they both use Short/Medium/Long but have different meanings.  We are considering making the weapon ranges: Point Blank (less then twice the weapons distance); Nominal (Between twice to four times the weapons distance); and Extreme (over four times the distance).  Would this help standardized the terminology and reduce confusion with new players?

- More Direct Fire - We have found that an experienced player with a missile heavy force can 'missile spam' pretty effectively and that direct fire sometimes get relegated to a secondary role.  Would changing the range band penalty help this?  Specifically, using the above terminology, change Point Blank from a +0 to a +1 CV to the attacker, change Nominal from -1 to +0 CV to the attacker, and change Extreme from -2 to a -1 CV.

It looks like I was a bit over ambitious on my page count.  Some of the items we have been working on are going to be in a second book (assuming sales go OK to do a second book) or as free online bonus content or both.

For the play testers, I'm working on a version that has our page count down, but here are some of the changes to expect.
- Characters - While I love the concept and think it was a unique idea for a starship game, they are being pushed to book 2.  This saves us tons of pages and allows us to integrate them better into the campaign system which was already scheduled (in my mind) for book 2.
- Squadron Orders - Since they were character driven, they will be part of the new rules in book 2
- Templates - Will be moved to web site for free download when we publish
- Sample Fleets - We will try to keep four of the seven in the first book.  The others may show in the second or as an online based on space and timing.

So what does that leave us for Book One?
18 pages of core rules
3 pages of space terrain
9 pages of ship construction items to include starship specials
10 pages of sample fleets (~2.5 pages per fleet)

I still need to squeeze in scenarios and my fear is we may end up dropping another two sets of fleets leaving only two samples.  Time will tell.

All that to give the testers a bit of fair warning on the next version headed your way by the weekend.

I'll be putting up a few questions for the testers that I am hoping to have your input on.  Watch for those soon.

Edit: I saw I used the word soon four times in three sentences at the end.  Changed to look less like a dweeb.